Normally Rome is not a city where we experience snow very often. We are some  20 miles away from the coast and we have a typical Mediterranean weather with mild winters. Snow is an exceptional event.

Cars, buses and scooters were not snow equipped and the traffic went mad. Schools were closed and it looked like Doomsday!

This morning started snowing seriously and the snow was sticking on the streets, but now it is raining again and the snow will melt quickly probably: this could be a real disappointment for the kids  coming out of the schools at 4.30 pm! They won’t be able to  play with snowballs or make a snowman.

The adults driving back home from work instead will be relieved, since Rome is a already extremely chaotic when it rains, guess what could it be with some snow inches on the road surface!

Here are some pics from our window taken this morning, we  live in a suburb so there aren’t spectacular views: 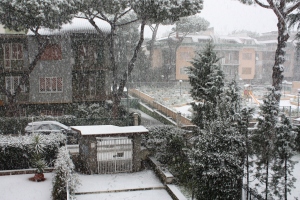 Here instead is a picture of the Colosseum in the snow from the news website:

One reply to “Snow in Rome!”